Do Your Own Radiation Monitoring

One in three Americans now lives within 50 miles of a nuclear power plant that routinely releases radioactive poisons into the environment, but there are no public health alerts for these invisible poisons in our air and water and the utility companies are only required to make annual reports on their emissions.

We want to empower you to monitor radiation in your own area and provide you with directions giving step by step instructions. Our BEST Radiation Monitoring Manual is modeled on the A Citizen's Guide to Monitor Radioactivity written by American scientist Norm Buske and Russian scientist Sergey Pashenko and on the BREDL/Shell Bluff - Draft QAPP of July, 2013. You can download both the guide and the manual from the column at right.

Our BEST/MATRR project director, Garry Morgan, is retired from the U.S. Army Medical Department with experience and training in Radiation Protection, Nuclear, Biological and Chemical Decontamination and emergency response in military and civilian medical care settings, and his military experience includes Personnel Reliability-Nuclear Surety inspections. Garry has expanded BEST/MATRR training and procedures to include Department of Defense, Department of Homeland Security and State of Alabama Department of Health Radiation Control protocols.

The BEST/MATRR Radiation Monitoring Project established 50 field test sites around Browns Ferry Nuclear Power Plant in north Alabama, and recorded background, air, and soil (or water) radiation counts per minute (CPM) at each of the sites, some multiple times and under varying weather conditions. Test sites circled the plant and worked outward to determine plume paths. The distances range from under one mile to over 90 miles from the plant, and the readings on the Inspector™ geiger counter ranged from backgrounds of 32 to over 1600 CPM. BEST Radiation Monitoring Project director, Garry Morgan, created an interactive map of the recorded CPM readings which can be viewed online at https://mapsengine.google.com/map/edit?mid=zUriF2xNKAQ4.kc_DIj9TCDyM 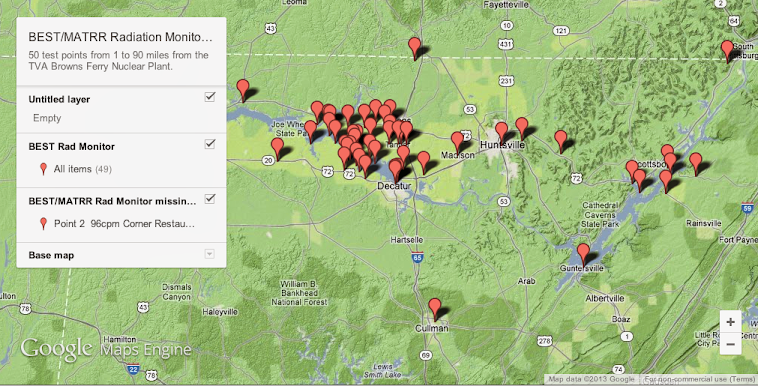 BEST/MATRR offers training workshops to help your group learn how to monitor your local nuclear power plant (or processing plant or nuclear disposal facility). We are a non-profit environmental group made up of concerned citizen volunteers (so we always welcome donations). To help other groups begin their own monitoring, our only charge for the one or two day session(s) is for basic travel, food and lodging expenses for our trainers. We will provide hands-on instructions on how to:

1. Organize members of your group for the project

2. Plan your systematic study of the area of contamination

4. Choose and organize the project equipment

5. Use the radiation geiger counter, as well as the real-time radiation graph and mapping software

7. Share your data with other groups and the scientific community

Please feel free to contact us for specifics by calling Garry Morgan at (256) 218-0124 or writing him at best(at)matrr(dot)org.

Sign the Petition for Dye-Markers, Health Alerts, and National Monitoring 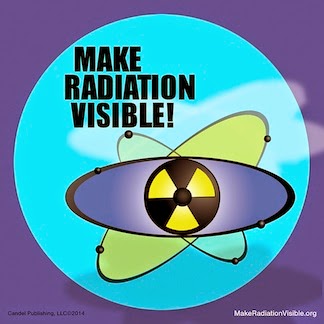 We think that commercial nuclear power companies and nuclear regulators in our own government are not doing enough to protect us from the dangers and existing poisoning from nuclear sources, so teaching citizens to monitor their own communities and sharing their findings with the scientific community is one way to draw attention to the problem and to make radiation visible through the collection and dissemination of data.

We are also spearheading a MAKE RADIATION VISIBLE campaign, asking the Nuclear Regulatory Commission (NRC), the Environmental Protection Agency (EPA), the President, and Congress to enact new regulations requiring Public Health Alerts (like Pollution Alerts and Pollen Alerts) for all radiation releases into our air or water. We are also asking that emergency radiation releases contain Visible Dye-Markers (like odor markers for natural gas and propane), and that commercial radiation monitoring be upgraded to Real-Time Online Radiation Monitoring. You can learn more about the campaign at Make Radiation Visible webpage or by going to MakeRadiationVisible.org. We also hope you will sign our people's petition to MAKE RADIATION VISIBLE athttp://www.credomobilize.com/p/MakeRadiationVisible and will share the link with all your friends, family, and colleagues.

WHAT YOU CAN DO

Join BEST /MATRR - Because It Matters

Print our 'check'' voucher and send it in with your electric bill payment.

Support Green Legislation in Your State.

Send a link to your friends

so they can learn about energy at MATRR.org.

You are encouraged to copy our written material,

but please credit all referenced sources.

All Videos, Photos, and Cited Texts Are Owned By Their Respective Owners.
Fair Use Notice: The material on this site is provided for educational and informational purposes. It may contain copyrighted material the use of which has not always been specifically authorized by the copyright owner. It is being made available in an effort to advance the understanding of scientific, environmental, economic, social justice and human rights issues etc. It is believed that this constitutes a 'fair use' of any such copyrighted material as provided for in section 107 of the US Copyright Law. In accordance with Title 17 U.S.C. Section 107, the material on this site is distributed without profit to those who have an interest in using the included information for research and educational purposes. If you wish to use copyrighted material from this site for purposes of your own that go beyond 'fair use', you must obtain permission from the copyright owner. The information on this site does not constitute legal or technical advice.

The MAKE RADIATION VISIBLE logo may be used when accompanied by the following:

and learn more at http://www.MakeRadiationVisible.org.

No posts.
No posts.
Home
Subscribe to: Posts (Atom) 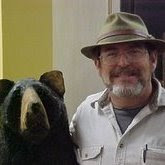 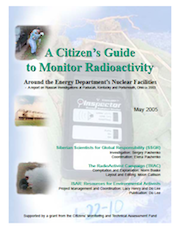 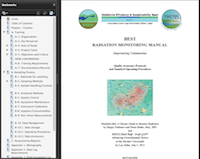 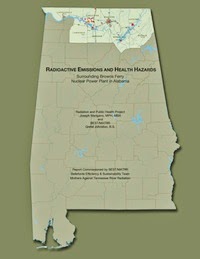 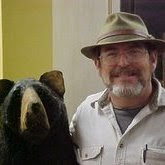 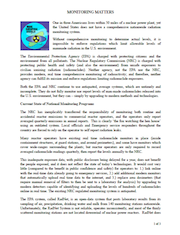 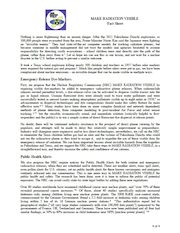 NRC and the TVA